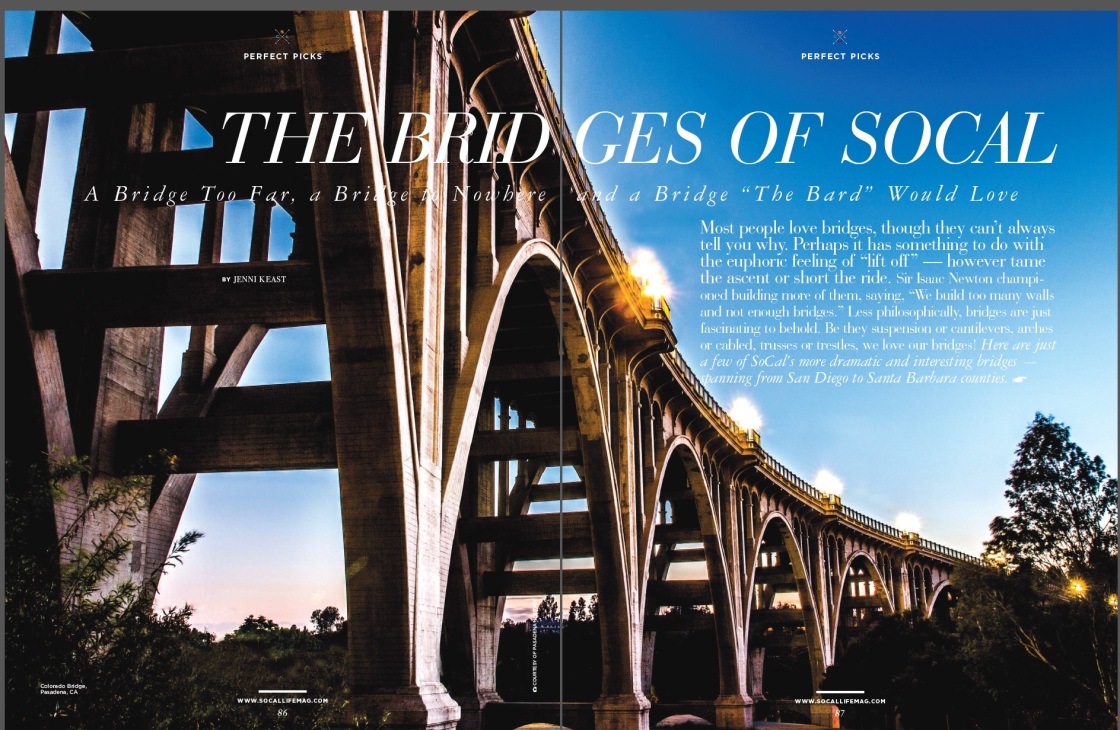 The Bridges of SoCal: A Bridge Too Far, a Bridge to Nowhere and a Bridge “The Bard” Would Love

Most people love bridges, though they can’t always tell you why. Perhaps it has something to do with the euphoric feeling of “lift off”—however tame the ascent or short the ride. Sir Isaac Newton championed building more of them, saying, “We build too many walls and not enough bridges.” Less philosophically, bridges are just fascinating to behold. Be they suspension or cantilevers, arches or cabled, trusses or trestles, we love our bridges! Here are just a few of SoCal’s more dramatic and interesting bridges—spanning from San Diego to Santa Barbara counties …

… Read the rest of the article published in Southern California Life Magazine (via Cloudup) or continue with the text-only version below.

As bridges go, this pure steel and concrete bridge is just a youngin’. The bridge, which connects San Diego to Coronado, opened to traffic in 1969. Though it put ferry drivers out of a job, it gave the San Diego landscape a stunning visual. Spanning 2.1 miles in length, this 20,000-tons-of-fun bridge has just the right angles and curves to make you feel a little daredevilish on your drive from San Diego to the artsy, beachy-chill destination of Coronado.

Getting there is half the fun. Though in this case, you’d have to define “fun.” This bridge is off the beaten path—smack dab in the middle of the expansive Anza Borrego Desert State Park. But if you’ve got the stamina, the sunscreen and the sustenance to make this 16-mile trek to the trestle and back—through seven tunnels—you’ll be rewarded by a stunning sight of the world’s longest freestanding trestle bridge. Built in 1919, this redwood-beamed structure is 600 feet long and over 180 feet high. And yes, per its namesake, it has goats nearby—bounding over boulders, stopping only long enough to bleat out “goat cheese” as you snap their photo. Oh, and there’s no cellphone service. Welcome to un-civilization.

O bridge, O bridge, where art thou? In LA’s trendy Los Feliz neighborhood, to be exact. Compared to its stately cousin, the Colorado, in nearby Pasadena, this 91-year-old designated city landmark may be short in stature (30 feet wide by 260 feet long), but its Gothic architecture—replete with turrets and towers—makes it long on charm. William would approve.

Quaint and artsy Pasadena, where monied, blue-blooded Easterners once “summered” over a hundred years ago, is a historic-architecture-lovers’ delight. The stately Colorado Bridge is one of the finest examples of the American Beaux-Arts style (1880-1920). Completed in 1913, the 1,467½-foot bridge with its 11 towering spans is both a Historical Engineering Landmark as well as being listed on the National Register of Historic Places. Every other summer, the Pasadena Heritage Society hosts a huge block party on the bridge, complete with food, dancing and vintage cars.

The Bridge to Nowhere

Feel like you’re going nowhere fast? For a change of pace, try going nowhere … slow. That would be the five- to six-hour, boulder-hopping hike to the unique concrete arch bridge aptly called the Bridge to Nowhere. Located north of Azusa in the San Gabriel Mountains, the bridge was built in 1936 to provide a passage to the mountain town of Wrightwood—until massive flooding derailed the project. The trade-off to this long, arduous hike to the bridge is no houses, power lines or noisy traffic—just the soothing sound of running water and swimming holes! If you go on a weekend, bungee outfitters are there to help you get somewhere fast by jumping off the bridge into the canyon below.

No trip to snazzy Santa Barbara would be complete without a visit to the nearby Cold Springs Canyon Bridge. Built in 1963, this fine example of civil engineering holds the distinction of being the largest steel-boxed, beamed-arch bridge in California. You’ll get vertigo glancing over its 400-foot-high drop as you drive its 1,148-foot span—not to mention you’ll get teary-eyed gazing at the spectacular panoramic view of the Santa Ynez Valley. After your visit, be sure to stop by the popular 131-year-old Cold Spring Tavern. It’s rustic and kitschy with yummy down-home culinary faire that makes Yelpers yelp with glee. Two good reasons to take a drive up or down the coast and make the most of a gorgeous SoCal weekend. – jenni keast