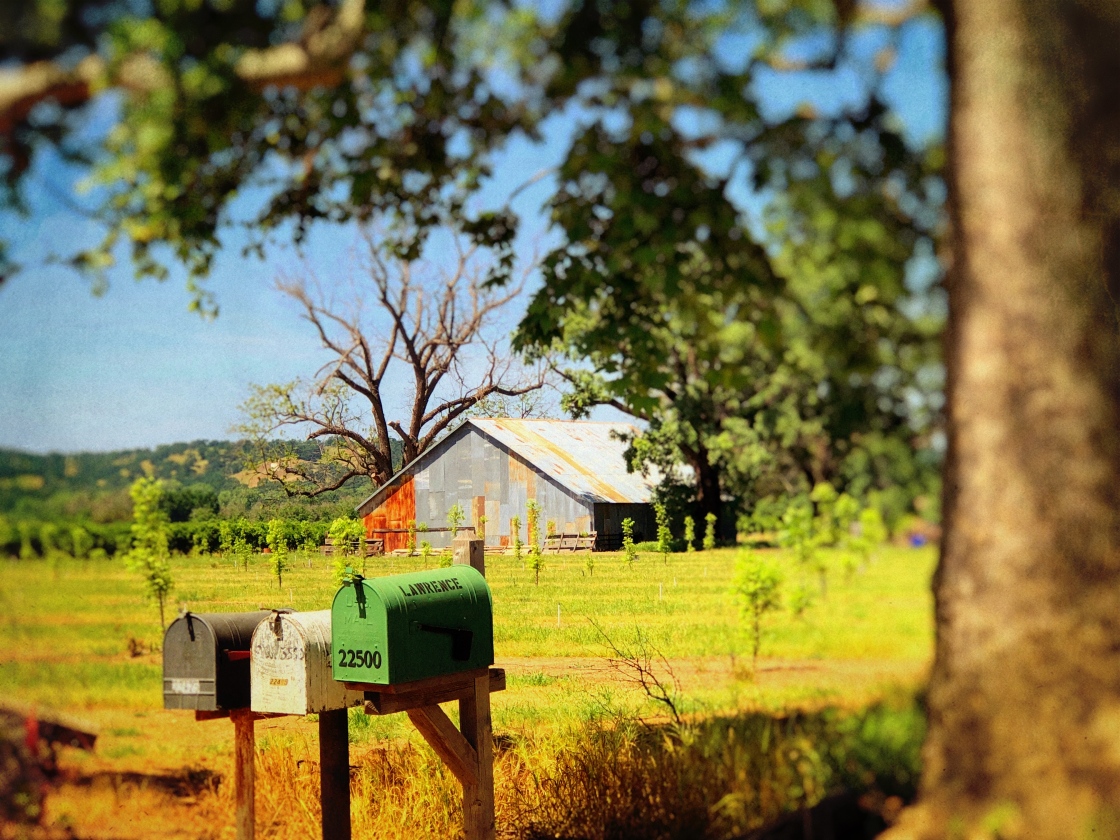 “Take Me Home, Down Country Roads” 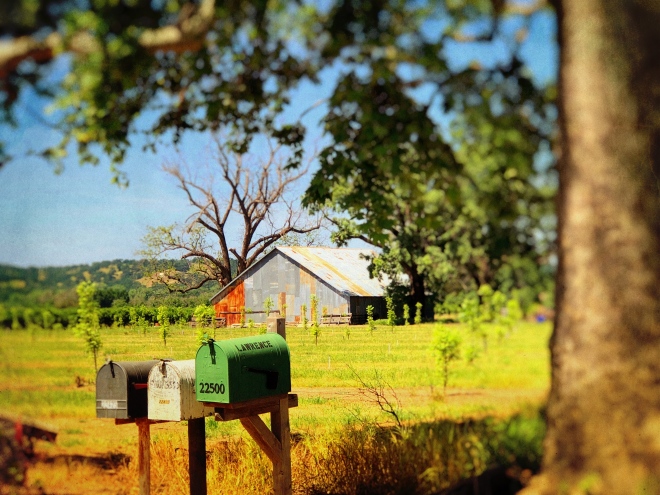 “Take Me Home, Down Country Roads”

Don’t be fooled by the name on the mailbox. “Lawrence” doesn’t live here anymore. Neither do his neighbors. Actually, it’s just their mailboxes that remain conspicuously empty. You see, when the bridge went out, so did the U.S. postal delivery. So now Lawrence and the rest of the folks living along this remote country road paved with tire-popping potholes must climb in their pickups and ride into town to retrieve their mail.

The town is down the road a spell—make that a long spell—past the Winnebago-sized red bull, the scolding chickens and, on this particular day, the carcass of a skunk being mercilessly picked over by a murder of crows. Three of them even managed to airlift the putrid corpse off the ground (giving new meaning to the term “carrion baggage”). Apparently, in these parts, crows aren’t particularly discriminating. But my nostrils were—the rank redolence of Pepé Le Pew lingered inside my car long after poor Pepé had passed his point of no return

Such is country life in the northernmost parts of California. It’s a far cry from the intense realities of urban LA life that I left behind. While Topanga Canyon (from whence I came) is undeniably rural, it’s the carefully cultivated version. If you’re a well-heeled flower child with cosmic sensibilities and a hefty paycheck, then Topanga Canyon is the place to be. Be prepared: A starter shack here will set you back 1.5 million. Or six “mil” for the quick-sale purchase of a certain former reality-TV star’s home. (Word is that he’s now working at Wienerschnitzel and could really use the money.) Compensation: The views are killer, the beach (such as it is) is close by and you can dance naked in the moonlight while Chakra chanting, “I’m a goddess, watch me roar.”

Topanga Canyon was gorgeous. It was my slice of paradise … with a hefty price tag. But the views here in cowboy country aren’t exactly shabby either. (You might even find a few naked people rustling around in the woods, though the reasons for that would differ.) We also have our very own active volcano—just in case living under the continual threat of wildfires and earthquakes isn’t excitement enough. What’s most exciting to me is not having to pay an arm and a leg for a decent place to live—in my case, a charming “writer’s cottage” nestled among the trees. A spectacular view of the Cascade Mountain range (snow-peaked Mt. Shasta looms the largest) and daily walks by the soothing Sacramento River with its resident wildlife are a nice bonus. It’s a lovely gift to me (just me) from the Creator—as are the ever-increasing number of artisan coffee houses and other LA-style indulgences that help lessen some of the cultural shock.

(Video: My second day in Redding at the Sundial Bridge and I was greeted by this. Sweet.)

Really, it’s hard to complain about a town that’s only ten minutes from wherever you need to go (compared to driving an hour and a half to go 30 miles), even if those places aren’t exactly hipster magnets. And that’s fine by me. At this stage of my life, there’s not a single eatery or trendy boutique in sardine-packed, Bird-scooter-strewn Santa Monica or Venice that’s worth being stuck in traffic for. Ditto with fighting for a parking space. As for living in those places for a whopping $2,800 and up per month just for a studio, I’ll pass, thank you very much. I’ll happily visit, but live again in LA? No way. The hymn is Peace Like a River, not Peace Like a Packed Freeway.

To quote a recent Popular Science Magazine article chronicling the damaging effects of city life on the human psyche: “Cities are vibrant, stimulating places, but their residents live with mental illnesses at higher rates than the general population … in one experiment, scientists discovered that after being in nature, people are less prone to rumination—the tendency to obsess over one’s mistakes and troubles that is a common feature of disorders like depression and anxiety.”

I think these social scientists are onto something. For one, it’s far easier to create community here—not just because of geographical proximity, but because people are just, well, friendlier. (Apparently some of my fellow Angelinos had the same yearning for connection—I’ve met a surprising number of vexed-in-the-city transplants here.) Romance may even be in the air. Case in point: Within a week of being ensconced in my cottage, a tall drink of water—complete with bona fide cowboy boots and the smell of the range—came amblin’ up to me in a church parking lot and began to ply his considerable cowboy charms. Back in LA, this kind of bold overture would be considered “Me Too” trigger material. Here, it was simply a case of a rugged Robert Duvall-ish cowpoke who, surmising that I wasn’t from around these parts, thought it might be a nice break from horse-whispering to wrangle in a “date” with a city gal. I didn’t object. The moral here: Less lonely are the brave.

As for the whole mental stability thing, well, all I can say is that since landing here, I’ve had fewer “down days,” I feel less dissociated, and I haven’t caught myself, as the Popular Science article termed it, “ruminating” once. I’m leaving that particular activity to the friendly neighborhood cows. They do it so well, and with far more productive results.

More on the spiritual side of this story (ministry of the interior) can be found on my blog titled, The Last Blog.