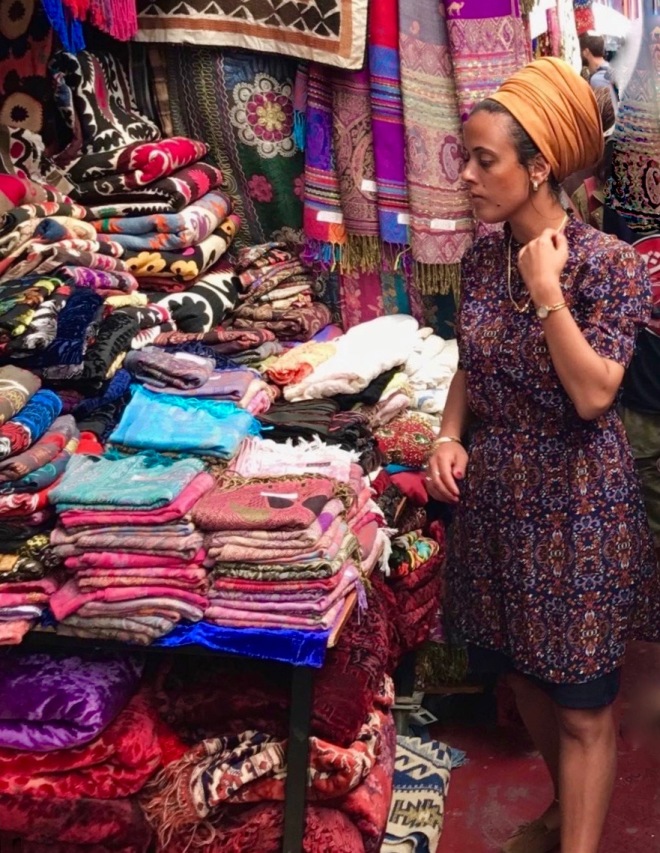 Tel Aviv – Part 4: The Jaffa Marketplace. So Many Goodies … So Little Time.

Migrating our way to Jaffa from downtown Tel Aviv was a harrowing, lost-in-the-big-city experience. Pretty silly, considering the relatively small amount of real estate in Tel Aviv we’re talking about. But round and round we went—three strong-minded women all with very different ideas of where we actually were and how to get where we were going.

As my friends were both Israelis (and I’m not), my personal take on which way we should go fell on deaf ears. I mean, really, what did this “goy” from America know about Tel Aviv? Nothing—but apparently neither did they. Oy vey!

Forty minutes and three different sets of directions later, we ended up at the Jaffa Marketplace. Now, THIS is a fun place. Here, everybody—regardless of their color, creed, or country of origin—hawks their wares in a packed-to-the-rafters repository of colorful fabrics, ethnic clothing, pottery, jewels, and a whole lot more. While there are many treasures to be found here, you’ll have to dig for them among the kitschy, tourist-targeting offerings; or, visit some of the adjacent high-end boutiques that cater to the more discriminating (read: “loaded”) crowd.

There are many different sections of the Jaffa Marketplace, and I couldn’t begin to tell you which ones I visited (except for the Jaffa flea market, which was, in a word, underwhelming—LA flea markets make this one look sad by comparison.)

However, given the acute sensory overload that tried my poor ADHD-addled brain to the max (barking vendors and too much stuff crammed into tiny spaces), I should be forgiven for my lack of ordinarily stellar reporting skills. Also, let’s face it—I was on vacation, not a travel assignment, so I chose to photograph what visually arrested me, while simultaneously ferreting out those hidden treasures that would actually fit into my already crowded suitcase.

My hands-down highlight experience at the marketplace came in the form of one of those delightfully unexpected moments. A Bedouin vendor started making a strange groaning sound—only to be followed by another man making a different—but equally odd sounding—guttural noise. Soon, a third fellow, a visiting Brit, joined in.

Not to be undone—mainly because I felt obligated to represent both the fairer sex and “the colonies” (no way was I going to let an Englishman get the upper hand)—I let out my own impromptu vocalization. Linguistically, I’m hard pressed to identify the origins of this primal “scream” that surprised even me; perhaps it emanated from my 17% Viking warrior side—who knows? All I can know for sure is that my Anglicized version of a tribal trill somehow magically jelled with the Middle Eastern sounds that were now echoing through the cobbled street—picking up speed as more people joined in the fun. Soon, laughter erupted from up and down the alleyway as different cultures collided in a rare moment of harmonious joy. This, I have to tell you, made my day—maybe even my month.

More on my trip to Jaffa—including what I ended up buying (too much) and the fabulous little restaurant where we had had our lunch—in my next post.

Meanwhile, here’s two more photos of the Jaffa Marketplace where fun was definitely had by all.