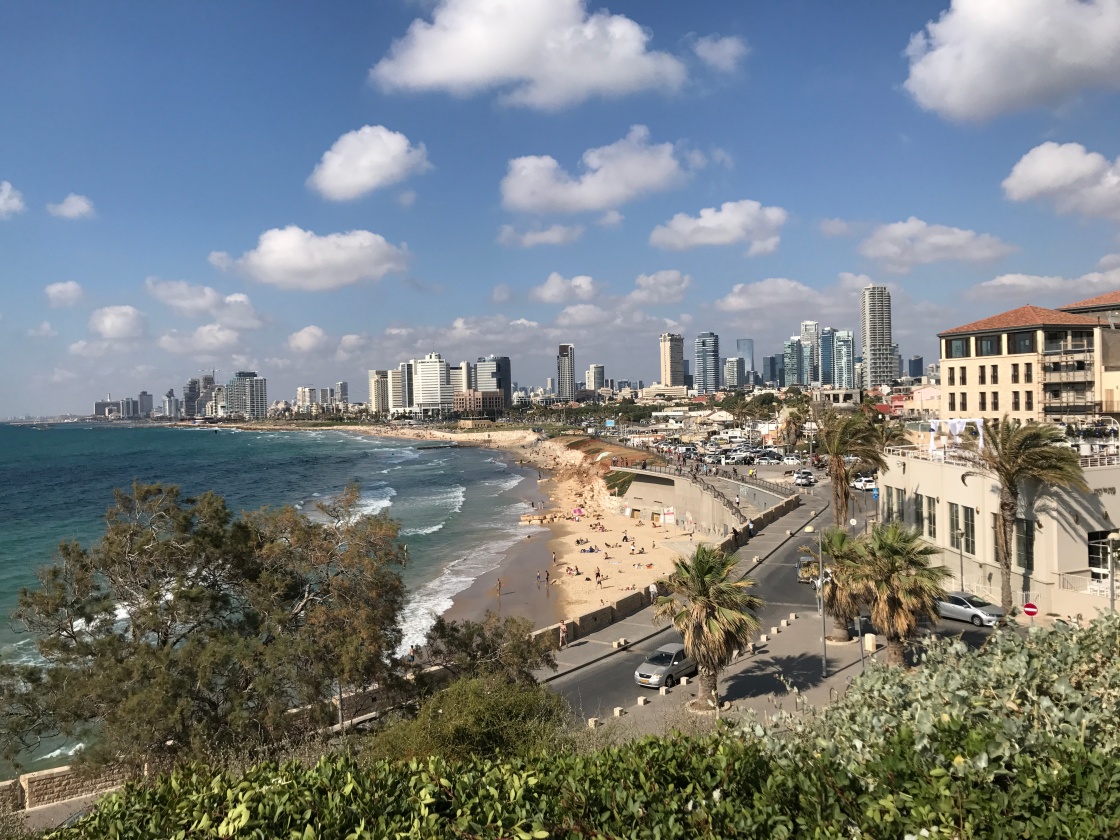 Tel Aviv -Part 3: History that you can see: “Bedouin raids by land and pirates by sea.”

I was blessed to have stunning weather while in Tel Aviv—actually, during my entire three-month, four-nation trip that started in Cornwall (UK) and ended in Entebbe, Uganda.

As you can see by my lead photo, the sky that day was puffy-cloud perfection, making the view overlooking Tel Aviv from Jaffa Port pretty spectacular. Although I didn’t hit the beach (too much to see in too little time), I enjoyed buzzing by it, as well as viewing it from above. Besides, Conan the Comedian gave me all the Tel Aviv beach scenes I needed to see in his hilarious special filmed in Israel—prompting me to join the “ban-every-Speedo-on-every-beach” movement.)

Here’s another stunning view from the same vantage point. In this photo, you see the Al-Bahr Mosque jutting above the ruins of the cast-iron cannons that were imported by the Ottoman government in the early 18th-century. The cannons were designed to protect their empire from Bedouin raids by land and pirates by sea. Today, less than a mile away, Bedouins are “raiding” the Jaffa Marketplace—plying their wares in this packed-to-the-rafters repository of colorful fabrics, clothing and jewels. As far as I know, no Turks living in Israel are pointing any cannons at these Bedouin merchants. Instead, they (the Turks) are building half of Tel Aviv’s towers—the ones dotting the skyline that look back on the very cannons that once protected their ancestors.

Speaking of “buzzing by” Tel Aviv beaches, here are a few street scenes that I took while being driven around by a crazy Israeli driver (is there any other kind?). In this case, it was my friend, Ronna. To her credit, she’s a great defensive driver—an absolute must if you’re going to place yourself in any motorized vehicle that’s rocketing through the streets of Tel Aviv. (Read my blog post titled, Three Days in Tel Aviv: Fake Lashes and Drivers Who Lash Out.)

Tel Aviv … Then and Now

Here’s the rest of my super brief history lesson—with some added moralizing (because someone has to do it, and Moses and Ezekiel are dead.)

During the late 19th-century, about the time the Ottoman Empire was about to expire, Jewish settlers began to migrate to the area—fulfilling the prophetic return of the Jewish people to Zion. Yemeni Jews (my favorite Jewish person I know is a Yemeni comedian) were some of the first to arrive and soon after, large numbers of Jewish pioneers from Europe began cultivating the sand dunes.

The arrival of more Zionists at the turn of the 20th century would ultimately evolve into the first modern Jewish city in the Holy Land. On May 21, 1910, after a long debate, a municipal committee decided that the city would be called Tel Aviv, after the verse in Ezekiel 3:15: “I came to the exiles who lived at Tel Aviv near the Kebar River. And there, where they were living, I sat among them for seven days—deeply distressed.” (As an Old Testament prophet, Ezekiel had more than his share of distressing days. Modern-day soothsayers have a considerably easier time of it: it’s “persecution lite”—with book tours.)

And now the half philosophical, half moralizing part.

The following observations are penned from the perspective of a Christian pilgrim (moi) visiting the Holy Land, so take that into account when reading this.

So what about Tel Aviv? Do I love or hate it? For my money, I love its food, its art, its shopping, and its ebullient spirit, but the raucous revelry part I could do without. It’s a “ditch Moses and worship the Golden Calf” kind of thing. (And we all know how well that turned out for the Israelites.)

While it may have been different in the past, the Tel-Aviv of today doesn’t feel all that spiritual to me—other than the New Age variety where “god’ is an impersonal, abstract concept identified by “good vibes,” “the light within,” “positive energy, ” etc. Oh, and lots of yoga and kale.

By and large, Tel Aviv-ers seem to prefer parties over piety. And while I enjoy a good party as much as anybody, as a Christian, I believe we were made for higher things; namely, to love and revere the Lord God on High who sustains our very breath, and in whom we find peace, joy and everlasting life. (Personally, I find this lifestyle to be the most celebratory way you can live.)

That being said, I’m not keen on the way the other end of the spectrum lives and behaves, either—those ultra religious adherents that I observed throughout my travels in Israel. I’m referring to the way they deal with outsiders and, I hate to say it, women. When you refuse to ride on an elevator with a woman (me) or spit, jeer and throw rocks at people (my Messianic Jewish friends) who are worshipping Jehovah God (just not in the way you believe), then Houston, you have a problem.

Here’s what I’ve found to be the best way to party hardy: celebrate away, but invite Yeshua (Jesus)—the coolest Jewish rabbi ever—to the party. (He likes parties; he made one significantly better by turning water into wine.) Doing so may cause you to ditch some of your more indulgent party activities, but the ones remaining will be a lot more joyful—and guilt free. (I’m speaking from personal “before and after” partying experience here.)

That about does it. My next post will have a little more of the standard “things to do and places to go” travel writing fare. Whether it’s travel writing or other genres, I generally write as “the spirit leads.” Sometimes, that leads me to talk about falafel and fancy hotels—other times, I take a sharp turn into the recesses of the human soul.

You’ll also find plenty of “go here and do that” travel writing in my published magazine pieces—because hey, that’s what they pay me to do. 😉