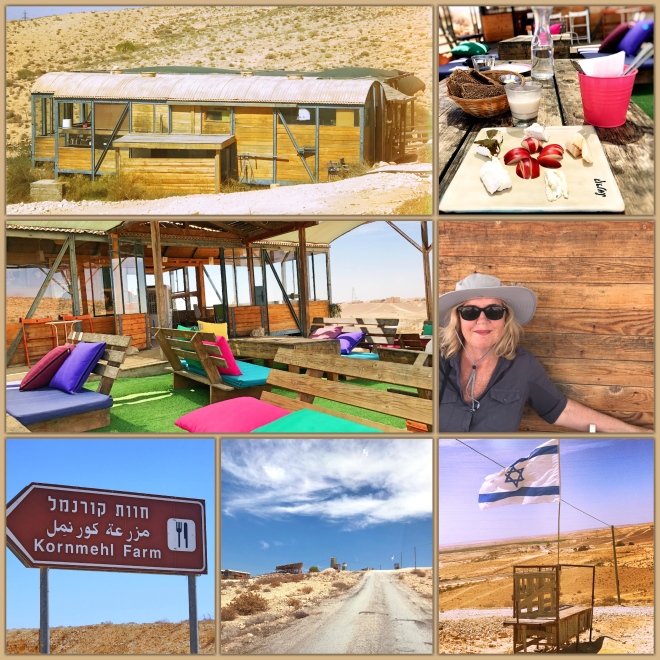 Beersheba, Israel: The Kornmehl Goat Farm—It’s Not Just for Goats.

BEERSHEBA, ISRAEL: THE KORNMEHL GOAT FARM—IT’S NOT JUST FOR GOATS.

Ladies, raise your hand if your idea of fun is trekking through a blazing hot desert with a back-of-your-mind fantasy that you might be lucky enough to lose your way—just so you could be rescued by a devilishly handsome Bedouin and his herd of camels.* Or perhaps an IDF soldier out for a jaunt from a nearby military installation. (A Lawrence of Arabia clone would be an acceptable backup.) Or, pretty much any halfway attractive member of the male species who just happens to appear in the middle of nowhere to rescue you, the official damsel in distress. (One cannot be too picky when lost in the wilderness)

Alas, being that I was, after all, wandering around in “No-Man’s Land,” no man appeared to fulfill my fleeting fantasy. (The only other human I saw was a hapless hiker who seemed to be going around in circles.) Nonetheless, my short time spent trekking around the desert was met with an unexpected reward: The discovery of the Kornmehl Goat Farm located smack dab between Sde Booker and Beersheba. It’s in the middle of nowhere which isn’t saying a lot because there’s a lot of “nowhere ” in Israel.

When you’re hot and sweaty and covered in dirt, you’re not typically keen on “eating out”; that is, unless the “out” is literally outside and the fare is light, fresh, and comes with a surprise explosion of color in the form of comfy pillows against which you can lay your weary head.

Weather-wise, my timing was perfect. Upon my arrival, as if orchestrated by the God of Abraham, Isaac, and Jacob himself, the desert wind suddenly whipped up, cooling my sweaty brow. At the same time, the sound of bleating goats and the buzz of a few persistent flies kept me seamlessly connected to my desert surroundings. Thank you, Jehovah Jireh!

Here at the Kornmehl Goat Farm, where pink, purple and primitive wood pair as beautifully as crisp apples with fresh goat cheese, warm homemade bread and a glass of cold goat’s milk, life at that moment seemed near perfect.

Cheeses included Camembert, Tommes de Pyrenees, Edna and a hard Alpine-like cheese called Adi. I learned later that owners Anat and Daniel Kornmehl are considered by many chefs to be the finest makers of goat cheese in Israel. I believe it. This dreamy, creamy cheese quickly had me saying, “Be still my bleating heart.”

After my delicious snack-meal (unfortunately, I missed the actual lunch hour), I seriously entertained the notion of stretching out on one of the pillow-clad wooden benches. It was not to be as I had to check into my new digs—a nearby kibbutz—so no snooze for this Sheba of Beersheba.

A poignant moment came with the arrival of a soldier girl and her mom. Their time together was short, but I was able to snap a photo of the two locked in a farewell hug. A week later, when I was in Jerusalem, Hadas Malka, a 23-year old female Israel border officer was brutally attacked by a knife-wielding terrorist at Damascus Gate. This happened just ten minutes from my hotel

Hadas died from her wounds soon after, and I could not help but think of this girl that I had encountered at the Kornmehl Farm. Having a daughter close to that age, it wasn’t hard for me to feel the pain of this mother’s loss. What was hard to fathom was living in such a volatile country where both sons and daughters get called up to military service as soon as they turn 18. How can any Israeli mother or father rest easily when they’re living on top of an ignited powder keg—one that could blow their family apart at any given moment?

A sad note to end on, I realize, but it’s important to be reminded of how fragile life really is. It’s all the more reason for each of us to put aside all of our distracting devices or “gotta get ahead” agendas, and be fully present with our loved ones, our friends … or even a stranger who is need of a kind or encouraging word.

My few hours spent relaxing at the Kornmehl Goat Farm, albeit a no-frills, no-thrills travel moment, was that for me. I had no agenda, no place to be, and was utterly tech-free. It was a happy day.