Continuing my three-month journey backwards—from Uganda, Israel, Italy and the UK—I spent my last few days in Entebbe getting up close and personal with a giraffe, a lion, a cheetah and an elephant (see last blog post) at the Entebbe Wildlife Sanctuary.

I then visited the Uganda Reptile Village, where I made sure I was as “far away and impersonal” as I could possibly get. Finally, to unwind from all those close encounters of the animal kind, I opted for a blissfully peaceful boat ride on Lake Victoria.

I was so lonesome I could cry … with joy. There is such a thing as too much togetherness, and after spending 10 days with my fellow volunteers at God Cares School in Kampala, I was ready to take the road less traveled—as in off-the-beaten red dirt roads of Uganda.

This is what I was waiting for. Unlike the driver of our big bus in Kampala, in Entebbe, my private driver could slow down whenever I asked him. This meant that I could finally photograph all the street scenes that are crammed into every nook and cranny of this beguiling country.

Turns out, I didn’t have to wait long to snap some pretty cool photos. (I’ll be sharing more images in upcoming posts.) Even more so than others, the long, bumpy road to the Uganda Reptile Village is culturally rich and riddled with artistic images (even the ones that aren’t identified as “artist/painter” on the outside, like this one).

Finally, after being jostled over way too many humps, lumps and potholes—for what seemed like an eternity—I finally arrived at the Uganda Reptile Village. Judging by the look of the place, and given that I was, after all, in a third-world country, I knew that I could not expect the same standards of animal welfare to be applied here as back in the States.

We’re talking two cultural extremes here. I mean, just try explaining the concept of “goat yoga” to the average Ugandan. In their mind, that lone goat tied up on the side of the road is a means of survival— not a means of siphoning disposable income from urbanized millennials hungry for an authentic “nurture-nature” experience as they “Om” their way to fitness. Then there are all the Instagram accounts in the US and other developed countries devoted to the cutesy wootsy antics of their poodles, pomeranians and what have you. It’s hard not to be acutely aware of the economic disparity between the two ways of life.

Enough of the infliction of Western guilt. I only have one parting “moral of the story” here: To quote the film, The Truth About Cats and Dogs, “It’s okay to love your pets … just don’t love your pets.” You know, where you spend more time and money on Fido or Fifi than you do helping people—at least those for whom it is within your power to help. (It’s not all about money, but love does have to look like something.) 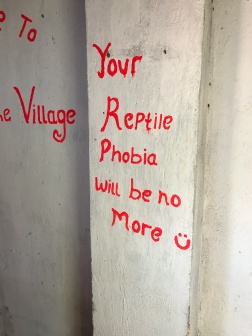 Back to the reptiles I was about to encounter. Did I mention I don’t like cold-blooded, scaly things? Well most of them anyway (with the notable exception of the chameleon … gotta love those guys). I need not have worried—from the get-go, the Reptile Village allayed all my fears with a “comforting” handwritten sign scrawled on the wall inside the entrance. Oh yeah, that makes me feel soooo much better.

And yet, while not a lover of slithery things or giant jaws that can snap you in two, I’m nonetheless loathe to witness any animal being forced to entertain visiting muzungus. Despite my concerns that this would be the reality, I bravely accompanied my guide on my mini Jurassic Park tour—Uganda style. As long as we didn’t go for an airplane ride in a 1930s German bi-plane, I was pretty sure I’d be okay.

Here are some of the creatures I saw. And yes, true to my concerns, Monty Python and his friends were painfully poked and prodded by their keeper to heighten the entertainment value for me. I asked him to stop, politely and with the utmost cultural sensitivity I could muster. (You don’t want to act like a self-righteous American and tell anyone in another country how to act … unless it involves the defense of life or limb.)

Finally, a reptile I can relate to: The ever-changing chameleon.

So, onto the beautifully placid Lake Victoria. Yay!

In a nutshell, Lake Victoria is the world’s largest tropical lake and second-largest fresh water lake by surface area. It’s second only to Lake Superior in that regard, though Victoria definitely reigns supreme in terms of absolutely nothing happening on this lake. No condos, hotels or boats … unless you count the few illegal fishing boats on the lake (a moratorium was placed on fishing due to it being overfished.) This made it peace like a river to my soul. It was just me and several of the over 1,000 species of birds that Uganda has to offer. Sweet.

Once the boat guy finally showed up (count on everything in Uganda happening an hour later than it’s supposed to … or not at all), I was off on my On Golden Pond adventure. Here are just a few photos of my languid, laid-back time spent being rowed around Lake Victoria by my friendly guide. 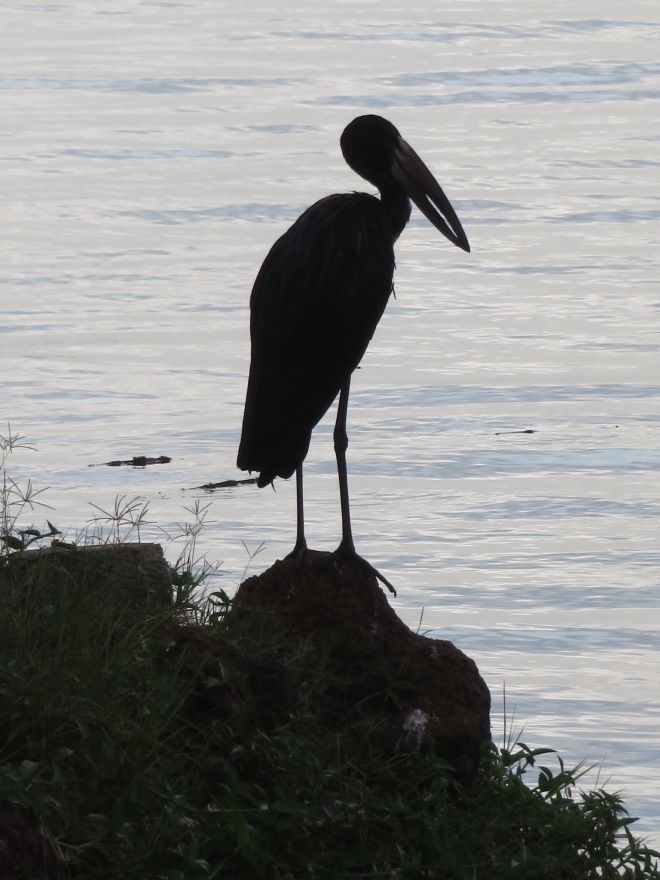 That’s it on the lakefront. Hope you enjoyed the quiet motor ride back home.

Next and final stop in Entebbe was … well actually a lot of stops—neither planned nor wanted—on the bumpy road to extortion. Turns out my driver “had a friend” who wanted to “show me around” to look at houses to buy. Apparently, this is what happens when all you do is express a mild interest in looking at places to rent for a few months … in the future, mind you.

Unfortunately, the combination of a language barrier and just plain Ugandan opportunism—especially when the people trying to survive are driving around a muzungu with money (or so they perceived, the reality is far from that)—translates into “Hey, let’s take this American ‘lone survivor chick’ for a ride.”

Don’t get me wrong, he and his so-called “realtor” friends were amiable fellows. But where they ended up taking me was not where I expected, and that, I can assure you, didn’t make me feel amiable at all. Not to mention that if I ever were in the market to purchase a house in Uganda, it wouldn’t be there. At least from what they showed me. These shoddily built, American-style track-style homes located in suspect areas were the polar opposite of what I envisioned a getaway writer’s retreat in Uganda would be. I’ve seen Out of Africa, and these places weren’t those.

In any event, when I finally got them to take me back to my Airbnb, I found myself met with an abrupt demand: Pay the “realtor” the equivalent of $50 American dollars for showing me three houses. Say what?! I quickly explained it doesn’t work like that. First, I never asked them to show me inside any houses. And second, realtors in the US don’t charge you for looking at houses—they only get paid a commission if you purchase a home.

They acted like that was a new concept to them, though somehow I doubt they were all that surprised by the revelation. Back at the Airbnb, my host confirmed that they were trying to scam me, and he was none too happy about it.

Lesson learned. And really, that’s what first-time travel to a foreign country is—a learning experience. You make some mistakes (hopefully not costly ones), then tell yourself, “Okay, well forewarned is forearmed, but sometimes you have to lose an arm (metaphorically speaking) to learn what NOT to do the next time around.”

That’s it for my Entebbe travel experience. Stay tuned for my next blog post where I visit several communities in Jinja. Life is hard there for most Ugandans, but there’s a village of valiant women who are taking their future—and their children’s future—in a different direction than the generational poverty surrounding them has historically dictated.