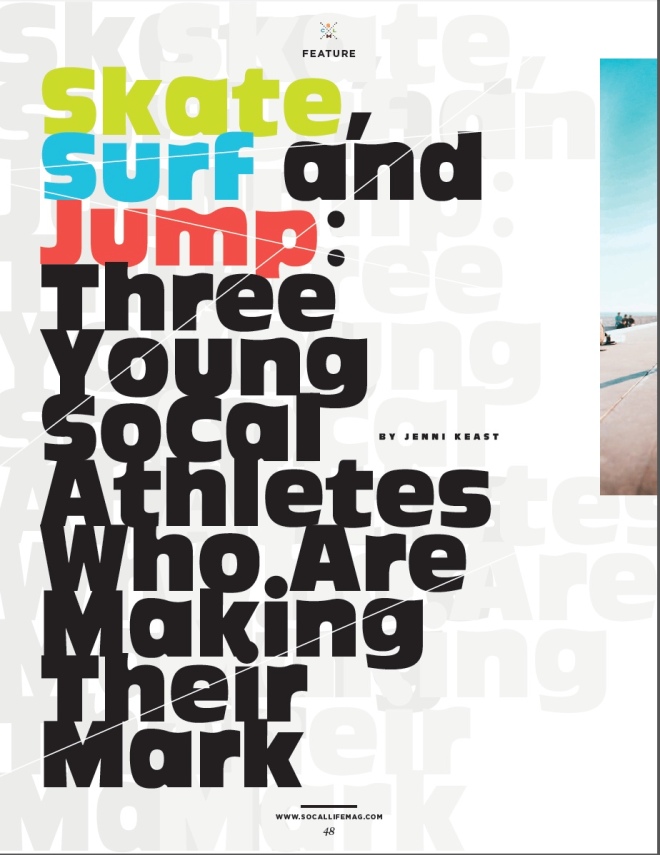 Skate, Surf and Jump: Three Young SoCal Athletes Who Are Making Their Mark

Skate, Surf and Jump: Three Young SoCal Athletes Who Are Making Their Mark

Justin Kalani Burbage – The social media influencer who’s having just too much fun.

Twenty-four-year old Justin Kalani Burbage is a native Hawaiian and social media influencer who’s happily riding his groundswell of popularity to the top. His extremely likable persona is a magnet for major brands that are looking for that magic combination of sincerity, charisma and off-the-chart good looks—with a silly side.

Justin started skateboarding at the age of seven, taught by his homeschooling mom on the island of Oahu. He’s also an avid surfer, splitting his time between both sports, while using his impressive camera skills to launch a worldwide video and film production career. Justin manages to deftly blend the various brands he represents with his adventurous lifestyle, turning what would otherwise be an obvious marketing pitch into a “Hey, if he uses that drink to keep him hydrated … then I need that too” type of coveted response from any one of his 117k followers. Click. Buy. Bingo! Brands are happy, and Justin gets a paycheck. Are you jealous yet?

Yet despite his relatively quick success, the self-effacing Justin is not all that driven, at least not in the typical sense. He still lives in his van on the beach in Venice and finds his greatest satisfaction in having a tight-knit group of friends—and family. That’s the Hawaiian way, which explains his answer to the question, “What big dream would you still like to fulfill?” “To be a father—I really want to be a dad,” Justin replies without skipping a beat. “Of course,” he adds, “first I need to find that wife with a heart of gold.”

As to how he found success, Justin claims that it just kind of “came while doing what I love to do.” Meanwhile, in between surfing, skating and shooting, he’s launching a non-profit that will tap big companies for products that he and his team can distribute to needy kids in the countries where he works. “I don’t want to just travel around having fun, taking selfies and promoting a fantasy lifestyle—where you take all the beauty and experiences a country has to give, and yet give nothing back. That’s just wrong to me.”

Girls, looking for that cute guy with a heart of gold? You may have just found him. (But first you’ll have to pry him out of his ocean-side bachelor van.)

“You can watch her on the shore, standing by the ocean’s roar.” Every day, for three to five hours, seventeen-year-old Soleil Errico strides to the ocean’s edge to do what she’s done since she was seven years old: ride the waves on her longboard. There is, perhaps, no lovelier a sight than a tall, California blonde “walking” a longboard with trained technical precision, while seemingly weightless, moving in seamless symmetry with the waves. This isn’t your fast-moving, acrobatic shortboard surf experience—it’s poetry in motion. Others simply call it “the flow.”

To date, Soleil holds over twelve surfing titles, including USA Surfing 2017 Women’s Longboard National Champion. Her home surf break is First Point Malibu, where she lives part of the year with her parents and two younger sisters who, she laments, “aren’t really into surfing.” The rest of the year, she surfs in Kauai where the Erricos have their secondary residence, aka a sweet slice of paradise.

Soleil practices what is known as progressive longboarding, a style that differs from the more popular shortboarding—the latter being a speedier, “hit the lip” kind of experience vs. the mellow, balletic movements of the longboarder. (Think Gene Kelly vs. Fred Astaire.) Word on the waves is that there is can be a palatable tension between shortboarders and longboarders, with the former group known to get verbally territorial if a longboarder starts to surf on “their” turf. (Kind of like a hip hopper yelling at a ballet dancer.) Why the hostility? “They think we’re kooks,” says Soleil.

Currently, Soleil is part of the 2018 Relik ™ Modern + Classic Longboard World Tour. Part surfing movement and part competitive sporting event, Relik’s sole aim is to celebrate the art and lifestyle of longboard surfing by gathering its top performers at the world’s best surf breaks—ultimately building community around the sub culture and lifestyle of longboard surfing.

It’s a culture that the Malibu teenager is happy to embrace on her way to winning the world title in longboard surfing. That’s her aim, anyway. You can watch Soleil and her fellow Relik World Tour competitors surf during their next competition from September 8-18 at the Lower Trestles surfing spot in San Clemente. It’s a dance you won’t want to miss.

With 2020 Olympic gold now in her sights, former USC long jumper Mady Richards knows a thing or two about suffering disappointments on your way to achieving your dreams.

In 2016, while a sophomore, she broke her fibula—a “chicken bone” crack that was heard round the track. That injury derailed her career for almost a year. Then there was the revolving door of coaches, forcing Mady to adjust to a new coach almost every year. In a sport where technique is a huge component of training and where each coach has a different method, the once-reticent Mady was forced to become her own advocate.

Through it all, she learned the power of faith, perseverance and discipline, as well as when—and whom—to ask for help. This inter-dependence includes a sports psychologist, coaches and even training partners who are likely to become competitors at the next track meet.

To keep her eyes on the prize, no matter how many setbacks she may experience, Mady uses a vision board—along with a sticky note on which she’s written bullet points of what she wants to accomplish. “Every time I come and go from my room, I can visually see those goals,” explains Mady. “And that helps me with my motivation—causing me to reflect on those choices I’m making throughout the day.”

Despite her numerous setbacks, Mady has accomplished a lot, winning many coveted long jump titles. But she wants people to know that it’s not because she’s some sort of “genetic freak” who was super gifted from the get-go. “I’m just an average person blessed with a modicum of genetic ability who has had to fight really hard to overcome a lot of adversity,” says Mady. “Whatever I’ve accomplished, it’s through perseverance. As someone once said, ‘A river cuts through a rock not because of its power, but its persistence.’”