Uganda: A made-for-the-artist marvel of street scenes, bad (and good) food, and a slooow way of life. The journey begins.

After an overnight stay and two hours spent touring the glitzy “fake and bake” city known as Dubai (100-degrees at midnight … really?) that was a bit too Orwellian for my tastes (beware of any country that has a “Minister of Happiness), my team and I landed at the Entebbe Airport. At first glance, it seemed we had landed in the 1940s—all that was missing was crossing paths with Indiana Jones ascending from the cockpit of his German biplane.

Things got dicey when we found ourselves waiting in the customs line for a really, really long time. We’re tired, we’re hot and yet the line never seemed to move as we tried to grasp the “system” at play there. Clearly they did not go by the “first-come, first-serve” traditional way of doing things. Random people seemed to be pulled out of line and ushered to the front for no apparent reason.

Or perhaps there was a reason. Or two. A native Ugandan who was standing behind me explained it to me and it wasn’t pretty. I don’t want to get into the weeds with this, so I’ll just boil it down to seven words: men in green vests and political corruption. Add to that an impoverished country where people find creative ways to procure money from easy marks they all assume have money (particularly Americans)—have something to do with it.  (More about the “Muzungu” syndrome in another post.)

Waiting in line without cell phone service (I only have wifi turned on when I travel overseas) did have its compensations. Like engaging in an actual—not virtual—conversation with the Ugandan fellow. He had been living in the US for about six years and was bringing his two little girls to meet their grandmother for the first time. Such a lovely family, with refreshingly well-mannered children. “Be a gentleman,” I overheard the dad say to his young son. The kid was barely potty trained, but I was heartened to hear that some father, somewhere, thought cultivating a chivalrous son was important. 🙂

While waiting, I also got a kick out of some posted signs I saw (the HIV warning was not one of those). Like this one: 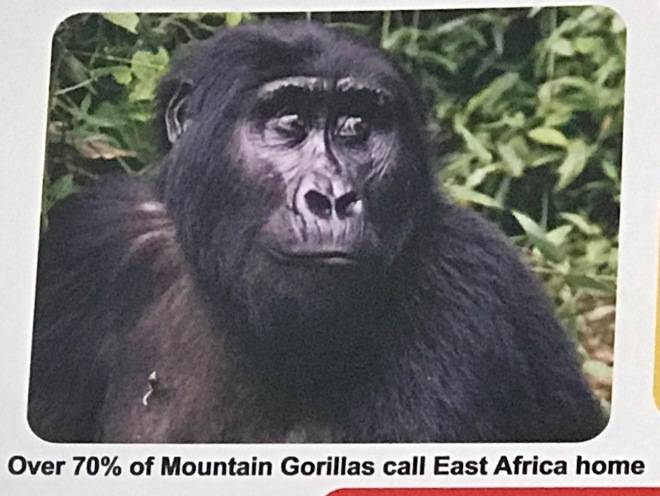 Hmmm. I don’t think even Jane Goodall could say that a gorilla possesses a knowledge of geography—including what pin dot on the globe he lives “on”, or the ability to communicate that awareness (if he had it) through language. “Hi, I’m Bobo, I’m a Silverback gorilla and I call Uganda my home. If you’re in the area, be sure to drop by for a visit with me and the Missus!”

After customs, we retrieved our baggage. Miracle of miracles, no one lost their luggage, including the 38 extra suitcases each volunteer brought that was packed with “Shoes that Grow” and medicine and gifts for the kiddos at God Cares School. 🙂

Not so fortunate was a member of the film crew/volunteers who accompanied us. He had his drone confiscated and no amount of persuasive speech by Buyamba’s charming and self-effacing CEO could cajole them into letting him bring that drone into the country. So that LA drone found its home on top off a heap of a whole bunch of other drones confiscated by the Ugandan police.

To be fair, most of those confiscations were justified. Illegal activity of all sorts abound in Uganda—making the argument of “But we’re filming orphans in Uganda” not quite a believable story to Uganda’s very suspicious authorities

Finally, the big bus from “The Glory House” (part of God Cares’ school) house arrived to transport us weary travelers to our accommodations. Our boatload of luggage was crammed through the windows into an old bus and we were on our way! 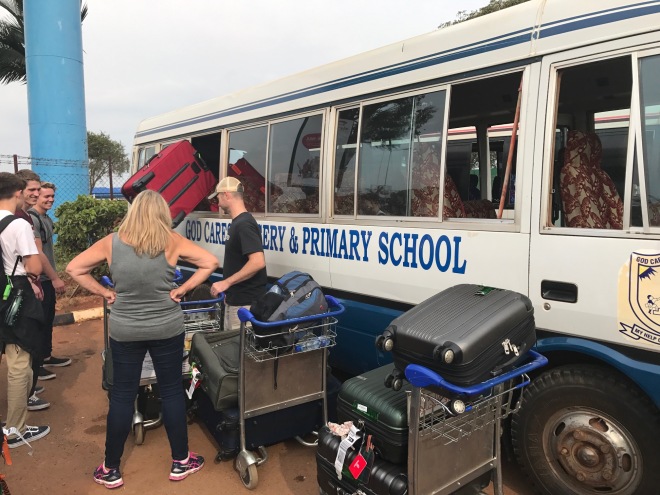 The “Glory House” was modest but surprisingly comfortable—made much more so by my good foresight when planning this trip. Amazingly, besides many changes of clothing, I managed to cram into my Tumi suitcase (love Tumi … it takes a lickin’ and keeps on tickin’) an REI inflatable mattress pad, a chemically treated mosquito net, a Big-E-zzzz XL inflatable camping pillow from Amazon and various others comforts that only the Western world can afford.

Big discovery! An inflatable pillow is awesome … you can make it as soft or hard as you like. Encased it in my silk pillowcase and voila! … both my hair and my aching neck were happy campers! Worked so well, I’m bringing this baby back home and using it on my bed.

While the room was monk-like in its stark simplicity (no furniture other than a single bed), I managed to make it work. Hanging clothes were draped over a single rod (no hangers), plus I had to put all my bathroom stuff on the floor and on top of the toilet. Unfortunately, I had to remove everything from the bathroom every other day as the toilet and bathroom floor got completely drenched when showering. That’s because the setup was a shower-toilet combo. Definitely different and, as it turns out, a common configuration in Uganda.

Then there was the hot water issue. One hot water tank for 38 people. You see the problem. Most of our team was was relegated to taking cold showers. No sireee … not me. I can endure many inconveniences but taking a “Mommie Dearest” shower at any time of the day or night—is not one of them.

So, like everything else, I created a workaround: Got up at 3:30 am every other day and treated myself to a hot shower. All this and Africa too. I was happy. 🙂

It IS beautiful here. From the pervasive smokey smells emanating from Ugandans constantly burning stuff outdoors (only way to cook for most of its citizens) to the vivid green dense foliage, to the wild Teradactyl-like caw of the Sacred Ibis mixed in with any one of a 1000 other species of Ugandan birds, I found myself quickly forgetting the comforts of home and reveled instead in the color and drama of the Kampala countryside … and later the city itself.

Only one thing I REALLY could do without: the African cockroach. Fine if I just knew about it but never saw one. Not so fine when it showed up in my shower/toilet room at 1:00 am when I had to pee. Big as a Mack truck. What’s a cockroach-fearin’ California girl to do?

It was a real dilemma finding that hellish thing in my sacred space. (Please don’t tell me that all creatures are created in God’s image. At least one, I’m quite certain, is created in Lucifer’s.)

Finally, after I could hold my filled-to-the-full bladder no longer, I clenched my teeth, tightened my neck and slipped sideways to the toilet. Butt down, the quickest void of my life. Just as I had feared, the creature suddenly moved, and true to my bug hating, liver-bellied form, I screamed like a banshee chicken when the creature suddenly moved … and I moved even faster … pj bottom half way down my leg.

No freakin’ way I was going back into my bed. My REI mosquito net may keep out tiny bloodsuckers but I was convinced this demon cockroach was going to find a way to get to me—perhaps from underneath the net while I lay sleeping. Or through a tear I didn’t see (though I checked nightly). Or, alternatively, he would bring his friends (cockroaches, I’ve noticed, have a lot of friends) who would simultaneously slither—in team formation—up my mosquito net pole, weigh down the net and land on me like a football field of linebackers. Either way, I was certain one of them would end up in my mouth as I lay snoring.

Roger Corman, are you reading this? (He follows me on Instagram though I have no idea why): THIS is your next horror film script. (Though he is in his 90s so not sure how freely the creative juices are flowing these days.)

So did I kill that cockroach? No way. At least not personally. I left my room at 1:15 am and stayed in the community room until a male member of our team appeared to rescue this damsel in distress. Sure I was in for a long wait. Guys being guys don’t generally roam the halls at one-ish the morning. Having no conscience, they sleep like a log.

Kidding on the above but maybe not. No male of the species appeared but two chicks from Texas did. Which is almost the same thing. They make them Ann Richards-meets Anne Oakley-tough in the Longhorn state. Put it this way: these gals came a packin’ … not guns, but plenty of gumption. They sprayed and smashed that creature until its body was crushed and its soul returned from whence it came: to the shadowy regions of the netherworld.

While I felt a bit wimpy about letting someone else do my killing for me, I took some comfort in the fact that these women let out a scared-shitless scream (pardon the language) before completing their hit. Apparently the cockroach didn’t die without a fight. He actually chased those Texas chicks out the door before they managed to crush him … and crush him good.

There’s more to share about my living quarters here in Africa—and about all the life-altering colors, sights and sounds of Uganda (including some very heavy emotional and spiritual stuff) but duty calls and time is a wastin.’ Though time in Africa, much to my delight, goes oh so slowly.

Now, if only I can bring that sweet, soul restoring rhythm back with me.